GOOD KINGDOM MORNING TO YOU SIBLINGS!

Let us start our day with shalom in the Word!

But what is shalom? Isn’t that Jewish?

I’m glad you asked! Shalom is a Hebrew word. Jewish is a people, Hebrew is a language. Now the Jewish people are our brethren, who are under many wonderful covenants with the Father which we will learn about as we read this year. We will learn about the covenants that include us as well, beginning today! The books we are reading now were originally written in Hebrew and from time to time you might see a Hebrew word thrown around in the group. You see, Hebrew is a far more nuanced and intricate language than many of the languages it has been translated to and as a result, sometimes in our reading we might find that the Hebrew counterpart to an English word just tends to go deeper for us. Shalom is the perfect example of this. Most folks know that Shalom means peace but it is actually more than that. Shalom is a wholeness of peace that can only come from the Father. This is the peace I wish each of us to have and that I pray multiplies as we continue in His Word!

I am trying to condense my rabbit trails or keep them to just a few points rather than covering everything for the sake of brevity (and because most folks can’t read Christy’s ramblings all day). Somedays I will be better at that than others. Today I’m about middle of the road.

🌿QUESTION WE ARE GONNA ANSWER TODAY: How long was the earth covered in water and how long were Noah and his family in the ark?

For most of us, our immediate response would be forty days and forty nights. That is just part of the story that we have inherited.

But just as we may have once believed only two of each animal went onto the ark (yesterday’s readings dispelled that myth), this is a great example of us needing firsthand knowledge of the Bible. It is important to note that inherited religion is not a substitute for a direct relationship with the Lord or with His Word and when we see these gaps in our faith (what we believe to be true vs what the Bible actually says) it should cause us to sit up straighter, awaken from our spiritual apathy, and take on the responsibility we have to do our own homework.

So let us look at what the Bible says.

First of all, has it ever occurred to you that you are a descendant of Noah? Just keep in mind while reading this that you are, in fact, reading your family history – in more ways that one.

So let’s see how long our grandpappy was stuck inside that boat! 👴

💧Genesis 7:7 – Noah and his family go into the ark seven days before the flooding begins (Genesis 7:10)

💧In Genesis 8:11 we are told that in the second month on the seventeenth day the fountains of the great deep burst forth and the Heavens opened. Note that it wasn’t just rain that caused this great flood, but the bursting forth of water sources within the depths of the earth as well.

💧Genesis 8:4 The ark came to rest on the top of a range of mountains known as Ararat (this refers to an entire range, not just a single mountain) on the seventeenth day of the seventh month (five months after it began).

💧The waters at this point were still covering most of the land because in genesis 8:5 it says that on the first day of the tenth month the tops of the mountains were seen

We are now at 8 months after the flood began.

💧Genesis 8:13 On the first day of the first month the waters were dried from the earth and Noah removed the cover from the ark. Since we began this journey on the tenth day of the second month, we are almost at one full year.

💧Genesis 8:14 – WE HAVE TOUCH DOWN! On the twenty seventh day of the second month, a year and twenty days after Noah and his family entered the ark, YHWH gave them orders to exit the ark and return to land.

In summary, while popular belief is 40 days and 40 nights, the truth is that Noah and his family were in the ark a little over a year and the waters covered the earth a little less than that.

🌿Neat things to look for:

Noah is considered to be righteous and yet in Genesis 9 we see him getting drunk and passing out unclothed – how can this be righteous behavior? You’ll notice many times in the Bible that we see YHWH’s chosen people behaving in ways that are not Godly and yet they are still counted as His chosen ones. It is important to note that the patriarchs of our faith are not whitewashed in Biblical text. They are shown as fallible, sinning people who fall short. In showing the reality of their character we see that man is never made righteous by our own efforts but through relationship with YHWH – Grace in action. Righteousness cannot be achieved apart from Him. However, that has never been license to live according to our wisdom rather than the Father’s.

🌿Note: the months of the Hebrew lunar calendar do not line up with our Gregorian calendar. The length and time of a year and month are roughly the same, but their months and beginnings of years are different. Jan 1 is not the new year on the Hebrew calendar. This is not significant to this story but just something I wanted to point out.

🌿 The covenant of the rainbow (Genesis 9) – This covenant is unilateral and for all living creatures. Unilateral means that it requires nothing on our part in exchange for YHWH’s promise and action on His part.

🌿Can you imagine the fear folks must have naturally felt, so close to when the flood happened, every time it came a downpour? Add to that the comfort of seeing a rainbow at the end of that rain. Talk about a sigh of relief! Regardless of the time that has passed, do not take seeing a rainbow lightly. YHWH’s covenant still stands – He is a covenant keeper! We will be learning a great deal about covenants – and which ones we are part of, as we go through YHWH’s Word.

🌿About the tower of Babel (Genesis 11:4): YHWH had commanded people to disperse and populate the earth but here we have people working together to accomplish their own will instead. Their desire to reach the heavens and elevate themselves to the level of YHWH demonstrates their haughty disobedience.

😲Ruh-Roh, I feel a preaching coming on. Feel free to exit the boat and get to your reading or buckle up and hang on!

It shocks me, so close to the flood event, that man was so quick to turn away from YHWH and attempt to assert their own will and dominance, but we are far more guilty of this today.

We turn from His ways, even believing when our world tells us that YHWH’s very Words, spoken in His own voice, are obsolete, and aside from the world, a vast part of the church says that portions of YHWH’s Word are not even relevant. We rely on our own wisdom instead of seeking His and sometimes go so far as to declare our own wisdom to be representative of His even though it stands in direct contradiction to His word.

But the fact of the matter is, You can’t recognize a counterfeit if you don’t know the original.

So many of these problems would be solved if we just knew the Word of YHWH firsthand. He gave it to us so that we can read it, know it, know Him, and walk in His ways – which are sometimes beyond our understanding but ALWAYS superior to our own.

And that is why it is SO EXCITING to stand on this ground with you, to be here, searching His word, reading it with fresh eyes and minds searching for the truth told to us in His voice.

So have you felt defeated lately? Have you felt tired, worn out, beaten down, dried up, and weary of this world?

Hang onto your hats. Because the waters of life are about to burst forth in your life.

Stay in the Word. Keep showing up each day. He is welcoming each of us home with open arms.

Class has begun, we have the greatest teacher of all eternity, and we all get to be teacher’s pets.

Test everything, hold tight to what is good – and HE is the only source of good. 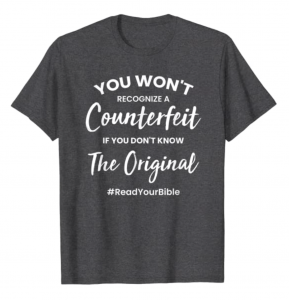